Ocean Acidification – The Other CO2 Problem 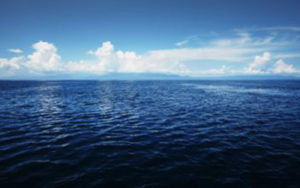 Climate Change was the topic nearly everyone was talking about in December.  A new international agreement to reduce man-made CO2 emissions was reached at the United Nations Conference of Parties (COP21).  And even better, the word “ocean” has finally been included in the introduction.  It is not enough, but it is a start.

There is a lot of discussion about climate change, however people still do not know about the “other CO2 problem” –  ocean acidification.

One Simple Fact That Cannot Be Disputed
Higher levels of CO2 gas in the atmosphere change the pH of the ocean.  It is basic physical and chemical science. Up to 30% of the man-made CO2 each year is absorbed by the ocean.  How much is that?  In 2013, it was estimated to be approximately 2.9 Gigatonne.⁠  Scientists have been able to calculate that around 26% of all man-made CO2emissions from 1750 to 2011 have been absorbed by the ocean.⁠

The result of all this excess CO2 is a 30% increase in the acidification of the ocean.  That is a fact based on measurements.  As man-made CO2 continues to be produced and absorbed, that level could increase up to 170% by 2100.

The current rate of acidification is more than 10 times faster than at any time in the past 55 million years.

How to Explain Acidification
In their homes, many people have vinegar, an acid, and ammonia, a base.  Acidity is defined by the concentration of H+ ions.  The more H+ ions, the lower the pH measurement and the higher the acidity.  The pH scale  ranges from 0 (acid) to 14 (basic) with 7 being neutral.  The pH scale is also logarithmic meaning that a pH of 6 is 100 times more acidic than a pH of 7 and 1000 times more acidic than a pH of 8.  What looks like a small change in numbers is, in fact, a big change physically.

Acidification means that the concentration of H+ ions is increasing.  The ocean has gone from a pH of 8.2 to 8.1 so while it is still basic (also called alkaline), the amount of H+ ions in the water has increased.

Increased dissolved CO2 reacts chemically in the water and it causes an increase in H+ ions.  It is like the CO2 in carbonated drinks like Coca-Cola.  There is also a reduction in carbonate ions, CO32-, which is an important substance for building protective calcium carbonate shells and skeletons for many marine organisms including corals.

The pH of the ocean is not the same everywhere.  The pH is lower in surface waters and in some cold water regions due to the circulation of currents.  A high level of nutrients in the water can cause a further decrease in the pH locally.

Why Acidification Is a Problem
Coral bleaching and the destruction from big storms can be seen.  But the impacts of acidification are not as visible – but they are already being felt in some parts of the world.  There were almost no studies on ocean acidification 15 years ago, but today it is an important and growing area of scientific research.

The impact of acidification is greater for the larvae stage of many species.  Just one example is oyster growers in the Pacific Northwest.  Since 2008, the ocean water has become so acidic that it dissolves the fragile shells of young oyster larvae.   It affects every grower and every hatchery from British Columbia to California.  With the help of scientists, they were able to identify the problem and start monitoring the pH to find times of the year that are safer to spawn.  Acidification caused a big economic loss for several years.  The oyster industry also had to invest a lot of money for sophisticated water treatment systems for their hatcheries.

Acidification also slows the development of coral larvae into juvenile colonies.  New studies are expected to prove that crustose coralline algae (CCA), which acts as natural “glue” stabilising reefs, is developing at a slower rates in lower pH waters.  Both of these changes are bad news for coral reefs which are under stress from many other factors too.  It makes it very difficult for reefs damaged by storms or dynamite to recover.  As acidification continues, it could weaken the existing coral reef structures.

Data is being gathered from the ocean and in laboratories on the impacts on zooplankton.  Studies, like the one done on pteropods, an essential source of food for species like salmon, show that these animals can continue to grow under high CO2 conditions. But their growth is slower and their calcium shells are thinner which could upset the balance in the food chain.

While most species seem to suffer in lower pH conditions, fleshy algae, for example, seems to grow better.  This might be good news for algae farmers, but it is also more bad news for coral reefs.  Much more work needs to be done in this field.  For more information you can check the references listed below.

What You Can Do

2) Ocean acidification is already starting to have negative impacts on seafood production and local economies.

3) As the pH decreases, the problems will only get bigger.  The negative impacts on reefs and some species will certainly increase, and it could potentially upset the ocean’s entire food web.

Integrate “Acidification” in Your Work –
1) Monitoring pH  is an increasingly important factor in marine rehabilitation and conservation, as well as in fisheries.  It can make the difference between success and failure in a project.

2) Share your data and results with agencies, associations and other researchers to maximise understanding.

3) Work with local policy makers and other actors to reduce local sources of stress and acidification on the ecosystem from human activity and development.