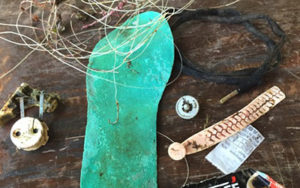 This is the third article of a 3-part series.  In this article we look at actions, innovations and the solution to plastics in the ocean.

What Actions Can We Take?

In addition to the 4 R’s: Refuse, Reduce, Reuse, Recycle, there are a couple of important actions you can take to help keep plastics out of the ocean.

Getting trash and plastics off the beach is the best action a person or community can take. You can do it anytime.  The debris collected needs to be disposed of properly to be sure it does not end up back in the ocean.

Saturday, 17 September is this year’s International Coastal Clean-up Day.  Started more than 40 years ago by the Ocean Conservancy, the 2014 Coastal Clean-up involved 561,895 people in 91 countries who cleaned-up 7,357,618 kg of trash.  Who cleaned-up the most debris?  Hong Kong cleaned up 3,898,652 kg with only 24,895 volunteers.  Those numbers tell you how big the debris problem is in Southeast Asia.

This event is an opportunity to develop community pride, provide a fun learning experience for schools, and a chance to enjoy a day with your friends.  To organize your own event, you can sign-up on their website.

They also provide a toolkit for preparing the event, recording the data, and reporting your efforts.

Clean-up the Reefs
PADI’s Project Aware Foundation encourages its dive centers around the world to organize “Dive Against Debris” events.  They also provide an on-line toolkit to help any diver organize an event.  It is a great way to get plastics off the reefs and out of other underwater environments.  Any diver can collect plastic debris, beverage cans, and abandoned fish gear during a dive.  Be sure to have a line cutter or scissors for safely removing fishing line or plastics entangled on corals – otherwise you will do more harm than good.  Net bags that can be closed work well for holding the debris until you can get back on land to dispose of it safely.

Are There Any Innovative Solutions?

There are some innovations in the development phase that could help get plastics out of the water.  Here are just two examples:

Solar Vacuum
At the “Innovate UK” show in November last year, the inventors at Bluebird Marine Systems LTD showed their model for the “Sea Vax.”

The boat is powered by solar panels and two wind turbines.  As the boat moves forward, the water and plastics flow into an opening.  Electric pumps and filters separate macro- and microplastics from the water.  An onboard shredder breaks up larger pieces of debris. The boat will be around 44 m long and fully autonomous.

The inventors estimate that the boat will be able to generate enough energy to treat an average of 89.9 million liters of seawater in a year and remove as much as 22,000,000 kg of plastic from water that has high concentrations of solid plastic.  The plastic is stored in a cargo hold that can carry around 150 tons until it can be unloaded.

The Sea Vax could be used in river estuaries, harbors, and even on open waters.  The prototype project will cost about £138,000 (roughly US$198,000 ) and take a year to develop.

The Big Boom
Now in a prototype test phase, the innovation of a young Dutchman, Boyen Slat (he was just a teenager at the time), caught the attention of media and doners.  Now The Ocean Cleanup is testing its prototype in the ocean off the coast of Japan.  If it works, they will tackle the Great Pacific Garbage Dump, one of the 5 gyres (slowly swirling vortex) in the world where plastic debris gathers in the ocean.  Since the water currents of the gyres circulate toward a central point, the plastics naturally concentrate there.  The concept is to use a stationary boom floating on the surface to collect the plastics.  The movement of the water will push the macroplastic debris along the boom towards the center.  When it arrives at the center, a conveyer belt will collect the debris on a platform.  Ships can collect the debris from the platform for recycling on land.

There are many in the scientific and technical community who critize the project, but they are not proposing better ideas.  Large waves in stormy open seas might be a problem. Or algae and other life forms could grow on the booms making them heavy and pulling them down below the surface.  However, Dutch engineers have good knowledge and experience working with the ocean.

We hope that it works, but it will not solve the whole problem. The majority of the plastic in the gyres are microplastics.  These plastic particles are suspended in the water going down several meters, making it more like a soup, and there are no ideas yet how these can be removed.

As discussed in the first article in this series, there are 5 countries in Asia that have the largest amount of plastic going into the ocean.  Efforts are underway to improve the policies, the collection of waste, and improve the permanent disposal or waste-to-energy conversion in those countries.  Organisations such as the United Nations Environmental Programme and the Trash Free Seas Alliance are working with countries to help make progress.  But that will take time, and the plastics continue to pour into the ocean.