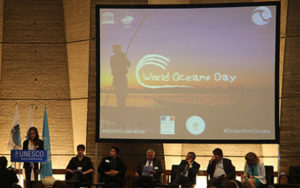 The UN noted: “The oceans are essential to food security and the health and survival of all life, power our climate and are a critical part of the biosphere. The official designation of World Oceans together scientists, political decision-makers, civil society Day is an opportunity to raise global awareness of the current challenges faced by the international community in connection with the oceans.”

World Oceans Day gives organizations working on marine research, education, and conservation issues a great opportunity to communicate on their activities.  Dive centers, eco-tour groups, school classes, museums, and many other groups get involved.  Events and awareness activities help local communities understand their impact not only on their local coastline and national waters, but also on the ocean we all share.

For the years 2015-2016, the theme is “Healthy oceans, healthy planet.”  Many local events and communications focused on creating awareness of the problems plastic cause in the ocean.  Reducing the use of plastic bags and eliminating cosmetic products with micro-beads are common topics.

Next year’s theme has not yet been announced.

The Intergovernmental Oceanographic Commission of UNESCO organized a full day of activities dedicated to the ocean and climate change.

The day started with a program for middle school students regarding the ocean, climate and plastic trash with the participation of Tara Expeditions Foundation and Surfrider Foundation Europe.

The rest of the day’s program included scientists, political decision-makers and non-profit organizations to talk about the relationship between the ocean and climate.  There was also discussion about role of the ocean and marine science in the implementation of international agreements by 2030.

Examples of Activities from Around the World

If you missed this year’s celebration, here are some ideas to inspire you for next year:

Community entertainment and learning took place on the beach in Tofo, Mozambique.

The University of Rio de Janeiro opened their doors to the public for workshops, lectures and videos promoting the awareness of the importance of conservation of the oceans.

Numerous expositions were organized including:
A call for action to protect Coral Reefs in Hong Kong, and
Tubbataha Seabirds photo exhibit and film showing – University of the Philippines – Los Baños.

There were beach clean-ups organized in many parts of the world including Canggu, Bali, Indonesia; Surat Thani, Thailand; Crawley, Western Australia; and Taiwan.

History
One of the outcomes of the United Nations Conference on Environment and Development held in Rio de Janeiro in 1992, was that several countries began to celebrate Oceans Days.  Starting in 2003, The Ocean Project along with World Ocean Network began coordinating numerous events.  They also launched the petition for official designation of the World Oceans Day at the UN.

Start planning now for your event next year!

The World Oceans Day website provides a place to register and find events, resources and tools – including for social media available for everyone to use.